BLOODY BRAINS IN A JUKEBOX! 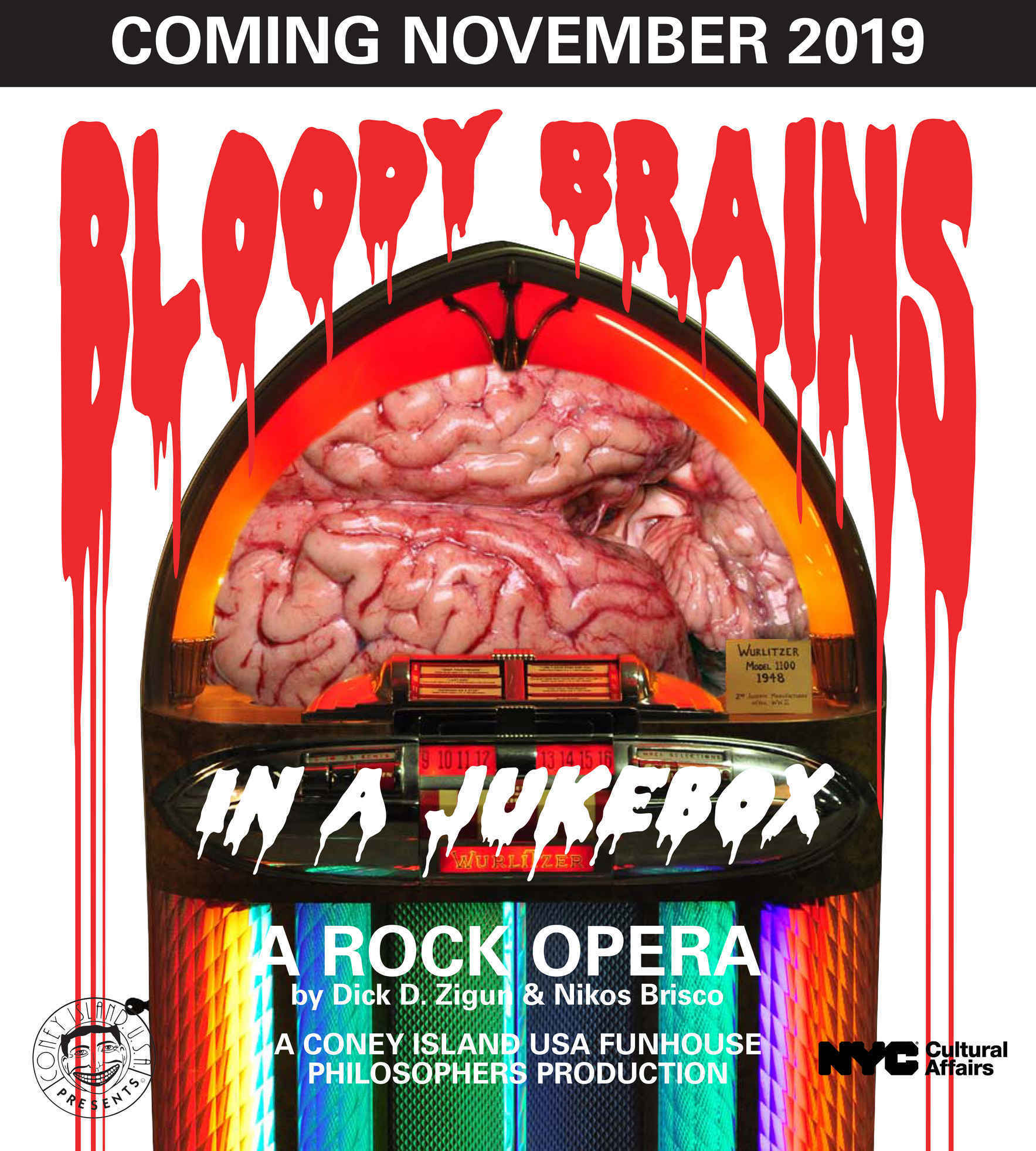 Help Funhouse Philosophers raise funds for our next production! 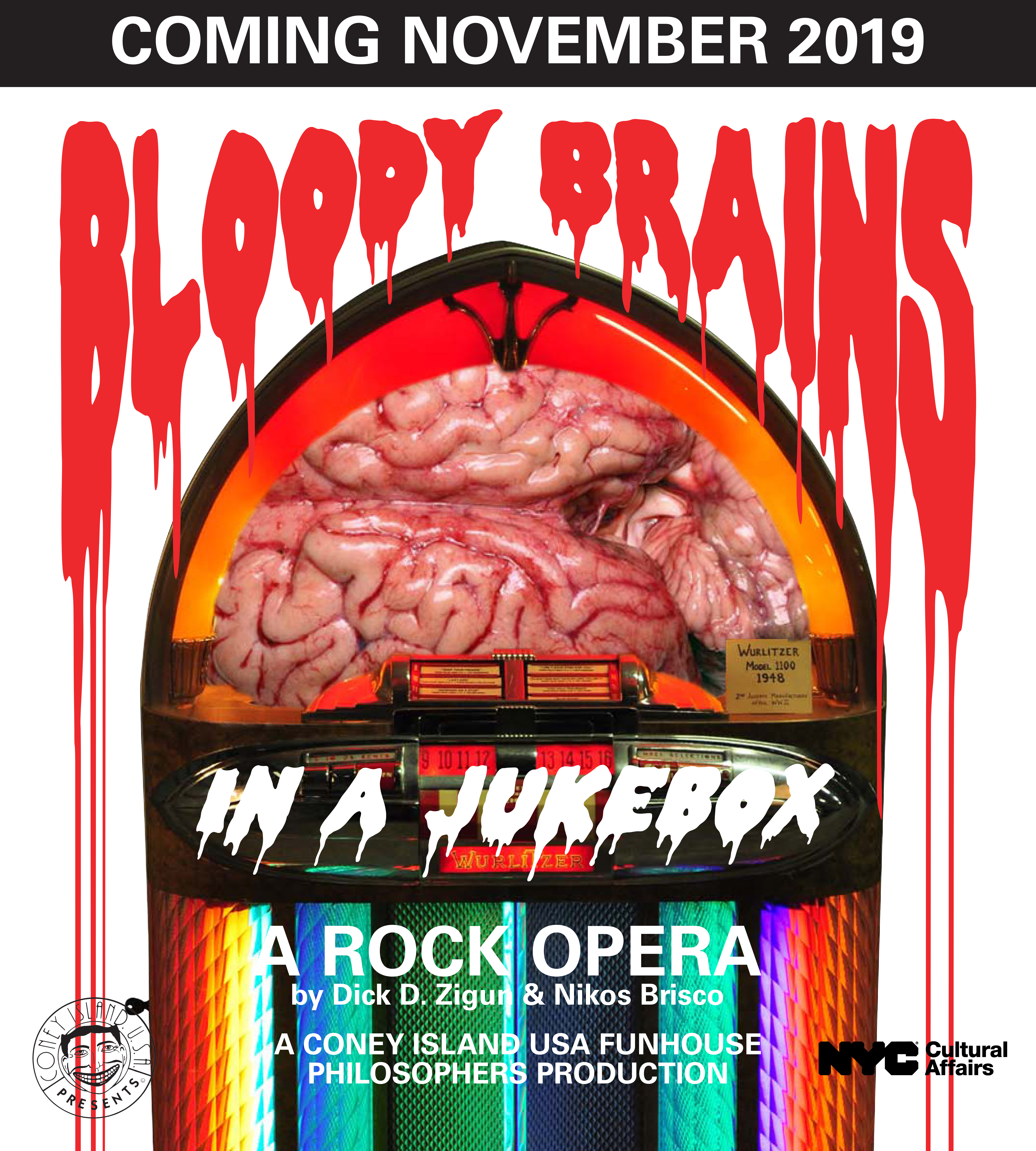 THANK YOU again to those of you who joined our fundraiser and those who contributed to our campaign! A week before the deadline, we achieved our goal to produce BLOODY BRAINS IN A JUKEBOX!!

In the final days of the crowdfunding campaign, we have decided to attempt to raise $1,000 more in order to enhance this show. Link in comments.

These funds would provide:
- A bigger rock band
- Promotional materials
- Rental of a genuine vintage Wurlitzer 1100 Jukebox, to be utilized for selfie opportunities
- A Mercedes Convertible in which Jayne Mansfield may meet her untimely demise.

ANY contribution helps! See you in November!

Funhouse Philosophers is the experimental theater company in residence at Coney Island, USA.

Here's your chance to help us raise funds for our showcase production of a new rock opera to run at Coney Island, USA every weekend in November.

BLOODY BRAINS IN A JUKEBOX!

In this sung-through and psychedelic sci-fi satire, characters resembling Sidney Poitier, Audrey Hepburn, Jackie Coogan and Jayne Mansfield tussle with a talking, flying, brain-eating Wurlitzer Model 1100 juke box – with results as mind-blowing and out there as anything you’ve ever seen at the sideshow. Bloody Brains in a Jukebox is Coney Island USA’s most ambition stage production ever, wherein Dick Zigun’s libretto and Nikos Brisco’s music interface with the patented madness of Circus Amok and the talents of several alum of the Bread and Puppet Theater, including puppet builder Sam Wilson & Ethyl Eichelberger award winning director Jennifer Miller.

While best known for such programs as the Mermaid Parade and the Coney Island Circus Sideshow, Coney Island USA has also been the longtime home of Funhouse Philosophers, a resident theater company devoted to presenting the plays of artistic director Dick Zigun, a Yale School of Drama and New Dramatists trained playwright whose previous works have included Dead End Dummy, Killing Republicans, The Ride Inspector’s Nightmare, and last season’s show The Education of Al Capone as Told by Jimmy Durante. In recent years, Funhouse Philosophers has been experimenting with the rock opera format in an effort to make abstract ideas like cosmology accessible via music and parody. Bloody Brains in a Jukebox is the culmination of that long-term exploration.

Bloody Brains in a Jukebox

BLOODY BRAINS already has the support of the NYC Department of Cultural Affairs, who will provide means to compensate the show's writer, composer, actors, production staff, and LIVE rock band.

Our initial goal of $5,000 will help cover our basic expenses.

However, this is the most ambitious protect we've ever attempted! So, we have a Stretch Goal of $8,000.

Achieving our Stretch Goal will help us take the rock opera experience to the next level! Pyrotechnics! Video mapping! Sets! Props! Horror/Sci-Fi effects! And a giant JUKEBOX PUPPET!!! ...Will all benefit from your contribution, which will help us deliver an enhanced production.

- Reserved front row seat at performance date of your choosing

- Box lunch at performance of your choice... includes your choice of popcorn, corn dog, or candy apple.

- Name on elite list featured in program for all Funhouse Philosopher productions of the 2019/20 season.

- Two tickets at performance date of your choosing.

- Box lunch at performance of your choice... includes your choice of popcorn, corn dog, or candy apple.